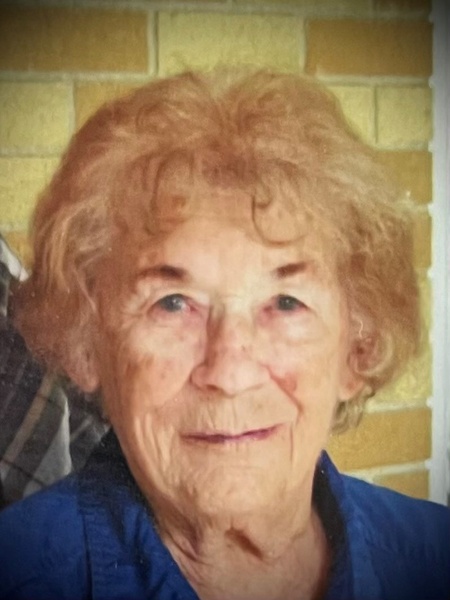 Ruth Ada was born on June 5, 1926, in Mount Pleasant, Iowa, the only child of Bill and Ada Bruhn. She died on April 3, 2022 at Lisbon Rehabilitation Center.   Her family moved to various rural towns in eastern Iowa as her dad was a life-long school administrator and math teacher. She attended school in Millersburg, Iowa.  During high school, she was an avid basketball player and known for her free-throw expertise throughout the county.  She attended Iowa Wesleyan and Central College and was later a teacher at the country school between Millersburg and Deep River.

Ruth Ada Bruhn married James Allen Sauter on June 5, 1945. Throughout their married life, they would live in the Millersburg and North English communities. Ruth Ada was a tireless mother and grandmother, who worked many part-time jobs at restaurants and the English Valley Care Center to help support their family.  She enjoyed her family and her many friends in these communities, spending her leisure time -bowling, golfing and keeping meticulous records of the misadventures of her children.

Ruth Ada enjoyed visiting her children and grandchildren, often driving great distances to help family and enjoy their company.  Her husband spent much of his time selling and repairing Chevrolet automobiles, while Ruth spent a fair amount of time damaging them.  Ruth’s driving incidents are legendary.  She was able to hit a lone car in a Kirkwood parking lot, drive off an embankment at the funeral home, and more recently, was able to drive her new car through the closed garage door and into the back wall of the garage.  During repairs to the new car, she managed to damage the rental.  To date, she is the only resident on Knoll Ridge Street who has been known to damage her car and her husband’s truck while both vehicles were parked in the garage.  At her last visit to the DMV, she maintained she would be able to renew her driver’s license if they would only let her drive “somewhere where I know where I am”!

She loved to travel. Many of her trips were with the Kirkwood Community College Board of Directors where she accompanied her husband to conferences around the country. Other destinations were with Jim to Chevrolet events and “visiting” Riverside Casino.  It is rumored that a new lane on HWY 22 was added so she could pass slower traffic on her way to the casino.  One of the favorite activities of her life was traveling with her eldest daughter, Kathy.  Each year they would depart on an adventure that inevitably would include a Cracker Barrel restaurant.  The Cracker Barrel ‘tours’ took place between 1980 and 1995, with the trip in 1992 being particularly memorable, as they managed to visit four Cracker Barrels on that journey.

Visitation will be held from 12:00 -2:00 pm,  on Sunday, July 24, 2022, at the Powell Funeral Home in North English.  Her ashes will join her husband’s and be distributed at places close to their hearts.

Powell Funeral Home in North English is caring for Ruth Ada and her family. Memorials may be given to the University of Iowa Stead Family Children's Hospital in Iowa City. Messages and tributes may be left at www.powellfuneralhomes.com.

To order memorial trees or send flowers to the family in memory of Ruth Ada Sauter, please visit our flower store.