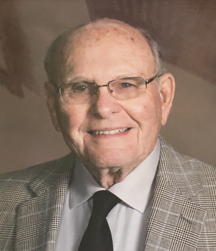 Mt. Pleasant - Anthony "Tony" Robert Bentler, 89, died Wednesday, October 7, 2020, at Great River Medical Center, West Burlington, IA.
Born March 9, 1931, in Houghton, Iowa, Tony was the son of Joe and Diena (Holtkamp) Bentler. He was a graduate of St. Mary's in West Point, IA. On March 28, 1954, in West Point, Tony married Evelyn Dyer. She preceded him in death on September 30, 2011. Tony spent two years in the army during the Korean war.
Tony owned and operated Bentler's 66 service station and car wash for 37 years retiring in 1992. He was a member of St. Alphonsus Church, Knights of Columbus, Parish Council, Past president of Jaycees in Mt. Pleasant, and a member of the American Legion. Any spare time was spent on the golf course.
Survivors include three sons, Roger (Pam) Bentler of Glendale, AZ, David (Staci) Bentler of Scottsdale, AZ, and Michael Bentler of Scottsdale, AZ; one sister, Rita Meyer of Davenport, IA; four grandchildren, Rhiana (Rolondo) Hopkins, Anthony Bentler, Taryn Bentler, and Tatum Bentler; and four great grandchildren, Skylar, Nylah, Roshawn, and Kamylah Hopkins.
Along with his wife, Tony was preceded in death by three brothers, Louis, Frank, and Leo Bentler; and six sisters, Gertrude Berg, Clara Pranger, Mary Menke, and Dorothy Pollmiller, Rosina Sanders, Agnes Fullenkamp.
Visitation will begin at 1:00 PM on Tuesday, October 13, 2020 at the Olson-Powell Memorial Chapel in Mt Pleasant where the family will greet friends from 5:00-7:00 PM. A Memorial Mass will be held at 10:30 AM Wednesday, October 14, 2020, at St. Alphonsus Catholic Church with Father Paul Connolly officiating. Burial will be in St. Alphonsus Cemetery with full military rites by the Henry County Honor Guard. Social distancing guidelines will be followed and masks are required for attendance. The service will be livestreamed on Powell Funeral Homes Facebook page and at www.powellfuneralhomes.com. A memorial fund has been established for the Mt. Pleasant Public Library and St. Alphonsus Catholic Church and may be directed to Olson-Powell Memorial Chapel at 709 E Maple Leaf Drive, Mt. Pleasant, Iowa.

Someone has supported the family by purchasing them flowers or gifts from the Healing Registry.

Tony was a kind soul. We were glad to get to know him. He will be missed. Lori & Lex Cavanah

Tony was a remarkable and unforgettable friend. He always was fun to be around. He graduated from High School with my brother-in-law Tom Welding in West Point and I think they were from the same mold Never in trouble but always right on the edge! Well maybe I stretched that a little. We will miss him.
Clarence & Mary Lou Perry

I always enjoyed our conversations and the history lessons he shared. He was such a kind heart who endeavored to make all feel welcome. Thanks, Tony.

A great man that will be missed by many. Heaven gained a good one.

Tony you were the best of friend anyone could ever have. We will miss you so very much. Marvin at golf or drinking a wine/beer and me cooking for you!! We so enjoyed our friendship over the years. Life will not be the same for us at the Day house that’s for sure. You touched so many peoples hearts with your kindness and great friendships. Such a great husband father and friend for sure. I will miss so much about you. I so was hoping to see you again! Rest In Peace my friend! Well never forget you

Sorry for your loss! 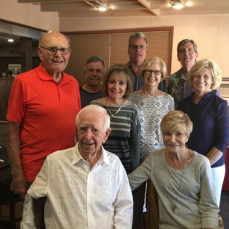 The attached photos are added to the memorial of Tony Bentler to help share their legacy.

Please help memorize Tony Bentler by recording your attendance below.

Thank you for sharing your memory of Anthony