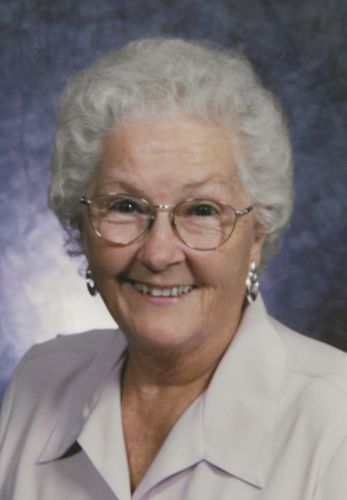 Cora Ellen Blackman of Mt. Pleasant, IA, formerly of the West Point and Ft. Madison communities, entered her eternal home on February 7, 2020. She was 96 years old and living at Sunnybrook Assisted Living at the time of her death.

Funeral services will be held at 10:30 a.m., on Tuesday, February 11, 2020, at First Presbyterian Church in Mt. Pleasant, with Reverend Trey Hegar officiating. Visitation, with family present, will be held for one hour prior to the service, beginning at 9:30 a.m. Burial will be at Hillcrest Memorial Gardens in Morton, IL. Gifts of love and friendship may be given to First Presbyterian Church in Mt. Pleasant. Olson~Powell Memorial Chapel is assisting the family with arrangements. On-line condolences may be directed to www.olsonpowell.com.

Cora was born on February 27, 1923, on a farm in Wayne County, Ohio, to J.B. and Flossie Ann (Ault) Hathaway where she was the fourth child out of nine. She married Billy J Blackman on December 12, 1942, while he was on leave from the Armed Forces before being shipped overseas to England during World War II. Cora worked as a bookkeeper in Bowling Green, Ohio while he was away serving in the Army.

When the war was over they started their family of four: William Bill (Cheryl, deceased) Blackman of Groveland, IL, Barbara Zierlien (deceased), Cathleen Witte (Gary) of Mt. Pleasant, IA, and Thomas Blackman (Gail) of St. Charles, MO. Cora worked as a housewife supporting her husbands career with the Eastman Kodak Company and raising her family. Together they lived in Rochester, NY; Park Forest, IL; Morton, IL; and Dayton, OH.

After the death of her beloved husband of forty years she retired to manage an acreage in West Point, IA, where she lived for the last 30 years of her life. During these years she formed a twenty-year friendship with Eldon Buskirk who preceded her in death. She was an avid knitter, loved to sing with the Pen City Singers, enjoyed playing Bridge and Euchre, and loved spending time with her children and grandchildren.

Along with her husband and parents, Cora was preceded in death by her daughter; daughter-in-law; three sisters; and five brothers.

To order memorial trees or send flowers to the family in memory of Cora Blackman, please visit our flower store.