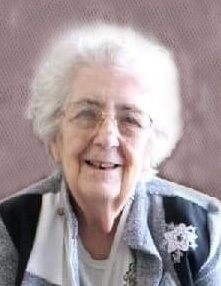 A visitation will be held Saturday, February 8, 2020, from 2:00 to 4:00 p.m. at Olson-Powell Memorial Chapel where the family will receive friends. A memorial service will be held Sunday, February 9, 2020 at 1:30 p.m. at Finley Chapel United Methodist Church with Pastor Lindsey Ford officiating. Inurnment will be at the Oregon Township Cemetery at a later date. In lieu of flowers the family requests memorials be given to the Finley Chapel United Methodist Church. Online condolences may be directed to www.olsonpowellchapel.com.

Born March 25, 1925, in Washington County, Virginia Mae was the daughter of Clark T. and Margaret C. (Koehler) Hopping. She began her education at country school then graduated from Washington High School in 1943. Virginia worked a couple of years as a machinist at Washington Manufacturing, Washington, IA before her marriage. On October 20, 1946, she married Lawrence F. Moore in Ainsworth, IA. Virginia and Lawrence owned and operated a truck stop and restaurant at the corner of highways 92 and 218 from 1946-1952. They then moved to a farm in the Finley Church area where they lived for over 42 years. In 1993 they moved to Mt. Pleasant.

A loving mother and housewife, Virginia worked alongside her husband on the farm. She was a member of Finley Chapel United Methodist Church, the Olds American Legion Auxiliary, V.F.W. Auxiliary, and a pinochle group. Virginia loved camping. She helped organize a local Huntsman group, and was active in Good Sams Club, Winnebago Club, of which she served as secretary and treasurer, and National Campers and Hikers Club for which she was also treasurer.

To order memorial trees or send flowers to the family in memory of Virginia M. Moore, please visit our flower store.