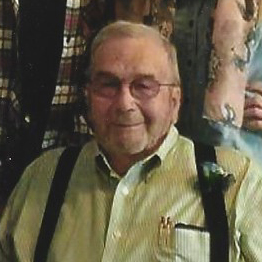 Kenneth Edward Dawson, 87, died February 10, 2020, at the English Valley Care Center in North English with his family by his side.

Ken was born December 23, 1932, near Keswick, the son of John P. and Mary Helen Agnew Dawson. He lived in rural Keswick, rural North English, and rural Parnell growing up. He married Marlene Shannahan, the love of his life, on November 10, 1956, at St. Michael's Catholic Church in Holbrook. After he and Marlene were married, they lived south of Parnell until 2017 when he moved to the English Valley Care Center due to failing health.

He had graduated from Parnell High School in 1950 and first worked in custom baling and farming. Ken loved raising beef cattle and sheep and farmed south of Parnell beginning in 1955. He drove a school bus for the Williamsburg Community Schools in the 1960s. After that, he continued to farm and also sold buildings for Pacemaker Buildings, Farm Service, and Lester Buildings as KenMar Enterprises. He loved talking to people and was a natural salesman. He received numerous awards for his building sales.

Ken was a member of St. Joseph's Catholic Church in Parnell until it closed and became a member of St. Mary's Catholic Church in Williamsburg after that. He served on the Iowa County ASC Committee and also as president of the Williamsburg High School Booster Club. After raising their kids, Ken and Marlene were able to spend time going to auctions, church dinners, and country music shows, and eating out. They ended most evenings by reading the newspapers and eating popcorn together. They also took great care of their swans, geese, chickens, llamas, miniature horses, guineas, and their beloved dogs and cats. Ken enjoyed John Deere machinery and collectibles, the New York Yankees, and spending time on his land and with his "girls" (cattle). He was an avid Iowa Hawkeyes fan.

But Ken most enjoyed spending time with his family. Ken is survived by Marlene, his wife of more than 63 years; and his children: Terry of Cedar Rapids; Tammy (Bruce) Bonnicksen of Rochester, Minnesota; Tim (Leigh Ann Wolfe-Dawson) of Estes Park, Colorado; Trisha (Dan) Gowin of Altoona, Iowa; and Anna of South Sioux City, Nebraska. He also is survived by his grandson Jeff (Nicholle Chadwick-Dawson) of Parnell, granddaughters Brooke Gowin of Overland Park, Kansas, and Paige Gowin of Altoona, and grandson Thaddeus Bonnicksen of Rochester, Minnesota, along with his great grandson Andy Kueter-Chadwick of Parnell. Ken is survived by his brothers: Gene Dawson of St. Louis, Missouri; Bernard Dawson of Bussey, Iowa; Patrick (Geneva) Dawson of Moscow Mills, Missouri; and Thomas Dawson of Torrance, California, along with numerous nieces and nephews. He was preceded in death by his parents and his brother, Leroy Dawson.

The family extends its gratitude to the nurses, staff, and therapists at English Valley Care Center for their outstanding care and compassion for Ken. He was cared for with great kindness and love by everyone there since October 2017, and therapists before that time. The Essence of Life Hospice staff also was wonderful to Ken and the entire family.

The funeral mass will be held at 10:30 a.m., Friday, February 14, 2020, at St. Mary's Catholic Church in Williamsburg with Father David Wilkening officiating. Burial will be at St. Michael's Cemetery in Holbrook. Visitation will be 4-7 p.m. on Thursday, February 13, at Powell Funeral Home in Williamsburg. There will be a prayer service at 4:00 pm.

Memorials may be directed to the National Multiple Sclerosis Society. Messages and tributes may be left at www.powellfuneralhomes.com.

3 people have supported the family by purchasing them flowers or gifts from the Healing Registry.

Marlene & family, we are so very sad & sorry to hear of Kenny's passing. Such a wonderful man. Please know that all of our family will keep you in our thoughts and prayers. Gene & Jane Walter, Tom & Angela Cisler, Scott, Tami, Gavyn & Gage Sickels.

To the family, my heartfelt condolences for your loss. Please find comfort in the knowledge that God promises to end all suffering. Before long, God will wipe out every tear from our eyes, and “death will be no more, neither will mourning nor outcry nor pain be anymore. The former things (will) have passed away.”(Rev. 21:3,4). May this promise from God give you comfort now and a real hope for the future. My deepest sympathy.

The attached photos are added to the memorial of Kenneth Edward Dawson to help share their legacy.

Thank you for sharing your memory of Kenneth