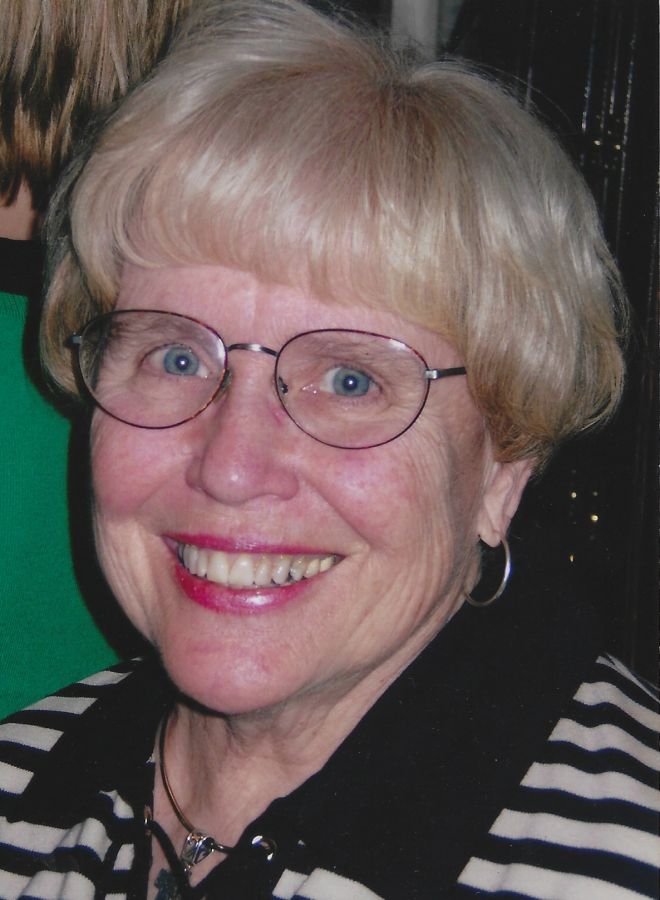 SIGOURNEY-Sally Joy (Larson) Marget, age 87, of Sigourney, died Tuesday, January 28, 2020, at Mercy Hospital in Iowa City.
Sally was born July 24, 1932, at her grandparents' farm home near Roland, Iowa, to Orville and Mayme (Hall) Larson. By the age of 3, her dad had Sally singing, yodeling and playing her ukelele at band concerts and amateur contests. She auditioned over WHO Radio Station when she was 6 years old. She also rode in horse shows every weekend during the summers. Sally graduated from McCallsburg High School in 1950. She worked at Dairy Husbandry Extension at Iowa State College for two years, then went to Northwest Institute of Medical Technology in Minneapolis, from which she graduated in 1953. Sally then went to work in Des Moines as a Laboratory Technician. It was in Des Moines that she met, and fell in love with, Rob Marget, of Carroll, Iowa. On June 30, 1956, Sally and Rob married at St. Ambrose Cathedral in Des Moines. They made their home in Sigourney, raising four children: Robin, Kathleen, Jeffrey and Molly. Sally was a member and past president of St. Mary's Altar and Rosary Society. She belonged to her women's bridge club for over 40 years. Sally served on the Sigourney Public Library Board for nine years. She enjoyed going to Notre Dame, Iowa and Iowa State sporting events with her husband, Rob. Sally was very proud of her Norwegian heritage. She enjoyed cooking and baking and sharing it with her family and friends, especially her Norwegian Kringla. Being a "Nana" to her grandchildren and "Nana Nana" to her great grandchildren was the highlight of her life. Sally was known for showing people how much they meant to her by sharing food, sending cards and letters, making phone calls, texting and providing encouragement to Facebook friends, for all occasions.
Survivors include her children, Robin House and husband David of Marion, Kathleen O'Rourke and husband Dan of Sigourney, Jeff Marget of Chandler, Arizona and Molly Dahlstrom and husband Sage of Coralville; 10 grandchildren; 11 great grandchildren; brother, Wayne Larson of Los Angeles, California and sister-in-law, Helen Marget of Iowa City. She was preceded in death by her parents and husband, Rob in 2005.

A memorial fund has been established for St. Mary Catholic Church, the Crohn's and Colitis Foundation or the Alzheimer's Association. Powell Funeral Home and Cremation Service in Sigourney is caring for Sally and her family. Tributes may be made at www.powellfuneralhomes.com.

"I would like my children to be the happy end of my story." - Margaret Atwood

6 people have supported the family by purchasing them flowers or gifts from the Healing Registry.

Hi everyone, your mom & dad were very dear friends of my parents ( Irvin & Evelyn Reynolds) and myself. Your mother always surprised me with first Christmas card after Thanksgiving. I’ll miss that special gift & special memories.
My love to all of you!
Kitty wineinger (Reynolds)

Dear Marget family-your mother was an angel to our family when my mother was battling brain cancer. She wrote notes, called and prayed for us all. Peace be with you at this sad time. Please know I am praying for you all now. Eternal rest grant unto her O Lord and let the Perpetual Light shine upon her.

I had the pleasure of meeting your mom and dad when I worked at Jack Walkers. They were the cutest couple. I remember your mom as being very complementary to everyone she encountered. My sincere sympathy to you all.

What a wonderful woman whose life was a celebration--to all that had the privilege to encounter her charm. I came to Sigourney in 1968 as the high school drama teacher and in the summer of 1970 we presented thr first Kiwanis community theater production--ANY WEDNESDAY. Sally Marget was the leading lady (Ellen Gordon) opposite Dr. Al Cornish, Jeanne Gann & Dick DeRegnier. What a marvelous cast. The joy & laughter they brought to the audiences were only surpassed by friendships they cemented. To Robin, Kathleen, Jeff & Molly your loss is now but your mom's memories will last as long as there is one Marget. Nana & NanaNana Sally will never be forgotten. All our love to your families, Gerry & Jinny Szymski PS--I'm so happy to have hugged her last July 4th, 2019.

Dennis and I want to send our deepest sympathies and prayers. We loved Sally and had many wonderful memories of her and Rob. She will be greatly missed!

Our sincerest condolences to your family. We thought the world of Dally. I know you all will miss her terribly. Prayers are with you!

What an amazing tribute! What insight her parents had when they gave her a middle name of "Joy." I enjoyed the photos and inspiring messages she shared of Facebook, but also have wonderful childhood memories of times our families spent together. Sally's family and friends are in my thoughts. You have our heartfelt condolences.
Ann & Andy Dudler

So sorry to hear about Sally...always such a positive and happy lady to be around. She will definitely be missed :(

The attached photos are added to the memorial of Sally Joy (Larson) Marget to help share their legacy.

Thank you for sharing your memory of Sally