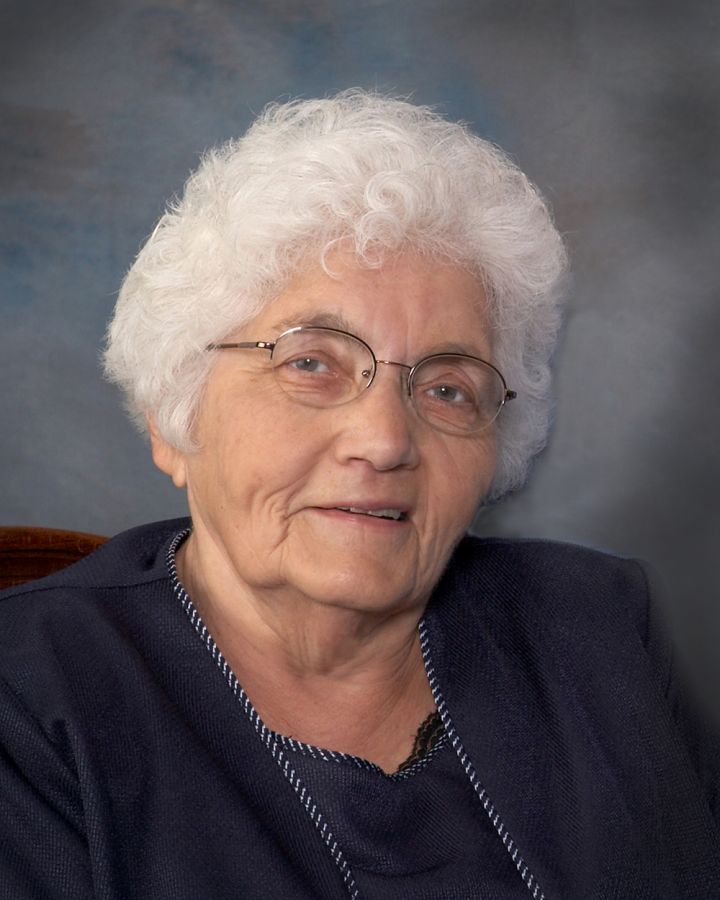 Kalona - Wava Ann Reschly, age 89 of Kalona, died Wednesday, March 18, 2020 at Pioneer Park in Lone Tree, Iowa.
Wava was born May 24, 1930 in rural Kalona, Iowa, the daughter of Chris and Cora (Miller) Troyer. She graduated from Brush #8 Rural School. Wava was baptized in the Lower Deer Creek Mennonite Church and remained a member until her death. On June 21, 1957, she married Raymond L. Reschly at Lower Deer Creek Mennonite Church in Kalona.
Wava grew up on a farm outside of Kalona, one of twelve children. She has held several roles in her life from homemaker, mother, grandmother, caregiver, furniture rental manager, and housekeeper. Her most endearing feature was her ability to make a friend wherever she went. No one stayed a stranger in her presence. She was a "mom" and "grandma Wava" to every one of her children's friends, and acquaintances. She loved to garden and made a mean pickle. She enjoyed cooking, canning and making sure her birds (and all her family) stayed fed. She was a member of the women's sewing club and had a passion for quilting and many of us treasure the quilts she made for us. She was also a member of the Kalona Women's Optimist Club. Wava opened her home many summers to Fresh Air children from inner-city Chicago. She hosted 36 children over her lifetime creating lifelong friendships.
Survivors include four children Jeffrey (Denise) Reschly, of Riverside, IA, Michael (Sheri) Reschly, of Elizabeth, CO, Trish (Michael) Constable, of Henderson, CO, Brent (Megan) Reschly of Marshalltown, IA; five grandchildren: Olivia Reschly, Justin (Hilary) Bowlin, Andrea Bowlin, Emily Constable, Abby Constable; one great grandchild: Tripp Bowlin; seven siblings: Wilbur (Nadene) Troyer of Nampa, ID., Don (Phyllis) Troyer of Nampa, ID., John Troyer of Houston, TX., Carolyn Vaandrager of Grand Rapids, MI., Mary Troyer (Dick Means) of Riverside IA., Keith (Linda) Troyer of Kalona, and a sister-in-law Evelyn Troyer of Blue Grass, IA. As well as many other nieces, nephews, and Reschly family members.
Preceding Wava in death were her parents, her husband Raymond on November 5, 2019, three brothers: Cleo, Paul, and Harold Troyer; two sisters: Marjorie Troyer and Lois Birky; four sisters-in-law: Arlene, Fannie, Fern, and Joanna Troyer; two brothers-in-law: Neil Birky and Vern Vaandrager.
Due to COVID-19 a private family service will be held. Burial will be in the Lower Deer Creek Cemetery. A public Celebration of Life Service will be held at later date. A memorial fund has been established for Iowa City Hospice or Donor's Choice. The family would prefer no flowers or plants at this time. The Yoder-Powell Funeral Home in Kalona is caring for Wava and her family.
The family would like to thank the doctors, nurses, and staff at Mercy Hospital, Iowa City Hospice, and Pioneer Park for their kindness and service to Wava. The family would also like to thank the members of Lower Deer Creek Mennonite Church and the many friends and family that have supported Wava over the last few months.

I am so very sorry for your loss. Wava was always a joy to talk to.

We are very sorry for your loss.
You are in our thoughts,
Ann & Andy Dudler

My Dad, Ed Yoder, has many fond memories of working with Ray and getting to know your mother and family. He wanted to let you know that he's thinking of you all and sends prayers for comfort in this difficult time. Blessings to you all!


Sorry for your loss!!! She was always a joy to talk to!
Thinking and praying for you all at your time of sorrow.

Love this picture of Wava, we are very sorry for your loss. Prayers to the family.
Clayton & Laverna Troyer

To Wava's family, so sorry to hear of her passing. May all the memories give you comfort at this time.
Cheryl Martin Miller

The attached photos are added to the memorial of Wava Ann Reschly to help share their legacy.

Thank you for sharing your memory of Wava